Mayor Trent Staggs is letting the public know the city is launching the Riverton Economic Revival Plan on May 1, the day after Governor Gary Herbert’s stay-home directive ends.

Staggs, who agrees with the governor’s current directive, says the plan will move forward even if the governor extends the stay home directive past April 30.

“We sensed a lot of people in the community are frustrated with the stay-at-home order,” Staggs says about one of the reasons for trying to revitalize the community. 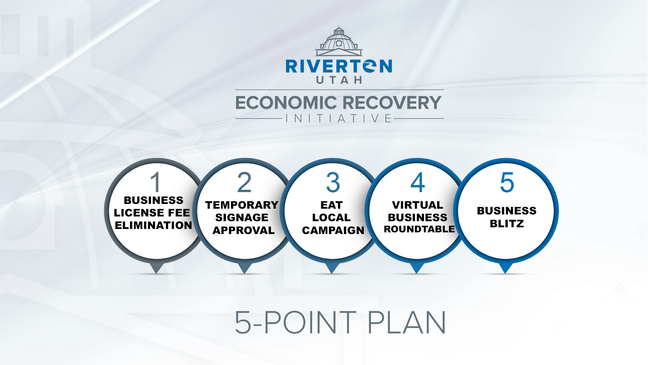 The plan has five parts but one of the main components is the “Business Blitz.” The business blitz will be held at Riverton Main Park. Staggs says there are roughly 450 businesses in Riverton and the city has already received interest from 40 to 50 businesses. They can set up signs and Staggs says people from all over are encouraged to visit.

“This is a contact-less event where people would remain in their cars, by and large, and just look at the deals that businesses have.”

Staggs says after seeing the deals at the blitz, they can then visit the business and buy and pick up the product.

Staggs says he’s taken a hard look at the health data and believes people are adhering to safe social distancing practices. Staggs says he is balancing business with health.

“I do not think they’re mutually exclusive. I think that the health and welfare encompasses of residents encompasses not just the physical but also the economic health.”

Staggs says law enforcement will be at the park, but he doesn’t foresee any enforcement being necessary. The revival plan has four other components, which can be viewed here.